Chris Boudreaux is the author of an upcoming book titled Social Media Governance. His goal with the book is to help "companies clarify and manage social media priorities, coordinate shared investments (such as information security and compliance), and define meaningful metrics to hold stakeholders accountable for performance of social media and social application investments."

Mr. Boudreaux has created an accompanying web site that contains a database of links to social media policies of over 80 organizations. The list is broken down by industry: Agencies: Advertising, PR, Marketing; Business Products or Services; Consumer Products or Services; Healthcare; Government or Non-Profit; General Guidelines and Templates.

There are some interesting examples within the pages, such as this one from Wal-Mart's Twitter External Discussion Guidelines, written by someone who seemingly spends a good deal of time plugged into Internet memes:

We won't reply to off topic @replies. Personal attacks and foul language = FAIL. Adding to the discussion = WIN. 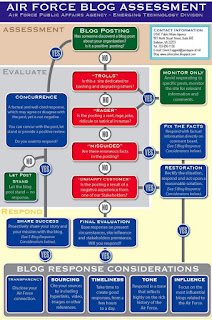 Some of the policies include what would like to think is common sense, but which all too often is not, such as this sample from ESPN: "If you wouldn't say it on the air or write it in your column, don't tweet it."

The Associated Press (AP) has a listing in the database, but the address doesn't work any longer. Back in June the AP came under attack for policies that seemed a little too aggressive, suggesting that AP employees should delete comments an employee's friends might make about the AP on an employee's Facebook wall. The example (emphasis added):

It's a good idea to monitor your profile page to make sure material posted by others doesn't violate AP standards; any such material should be deleted. Also, managers should not issue friend requests to subordinates, since that could be awkward for employees. It's fine if employees want to initiate the friend process with their bosses.

The NFL and Chad Ochocinco have been locked in a struggle that culminated with the NFL posting its own rules essentially saying that play-by-play tweeting was not allowed, bypassing a plan by Ochocinco to signal friends to tweet pre-planned updates during the game. Ochocinco twote that he would essentially take his ball and go home, telling his followers that he was going to delete his account. He hasn't done it.

If you're an organization considering your own social media policy, the samples are very useful. The following articles might provide more help in fleshing it out and customizing it to your needs:

If you do come up with your own, you can add it the policy database. At least that's what the form on the site claims.