Jacob Gube has posted a handy chart over at Six Revisions titled "Performance Comparison of Major Web Browsers." He tests the current versions of five browsers:

In his tests he used the following performance indicators, tested three times each with an unprimed cache, and averaged the results:

When Google Chrome 3 was released in September, Google claimed a 150% increase in JavaScript performance from its previous version but didn't offer comparisons to other browsers. Opera also made improvement claims in its September release of Opera version 10, specifically a "40% faster engine." Those claims are also not made in comparison to other browsers. The overall performance ranking he assigns to the browsers isn't too much of a surprise, with Google Chrome as the best and Internet Explorer 8 as the worst. If he ran as many persistent tabs in Firefox as I do, it might not hold on to the #2 slot so easily. The ranking:

Use the chart below to link to the full size version. You can also download the raw data in CSV format from the site in case you want to try your own hand at colorful charts. 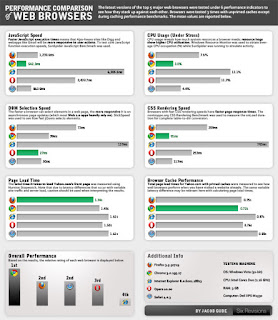