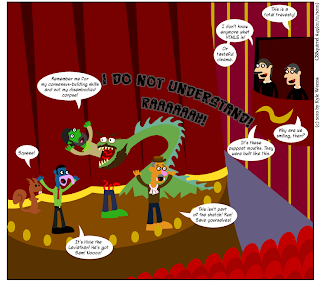 Many of us have been following the ongoing progress of HTML5 for some time now, alternately curious and confused by the nascent specification. Comics like the one above (from the CSSquirrel site) demonstrate the frustration many web professionals are feeling with the mixed messages they think they see from the W3C and Ian "Hixie" Hickson (HTML5 editor through the WHATWG) through recent updates and announcements.

Kyle Weems opens his blog post (Comic Update: The HTML5 Show (AKA, A Mess)) last week with the statement, "HTML5 is a mess." He argues that Hickson is working to get developers to adopt the WHATWG HTML5 spec over the W3C spec. He also cites examples where he feels Hickson is pushing developers to stop using HTML5 features, and further suggests that Hickson is trying to wrangle the future of all HTML as his own while he hands off an HTML5 version to the W3C while further developing HTML.

Peter Paul Koch (ppk) takes a different approach in his blog post (HTML5 means whatever you want it to mean). Peter references an IRC discussion where Jeremy Keith pointed out that there is no HTML5 spec which he can use for evangelism. Peter argues that HTML5 is vaguely defined almost on purpose, owing to the fact that technologies get pulled into web specs as they are adopted. He suggests that HTML5 is a continuation of Web 2.0, itself a continuation of DHTML. It's similar to the way that Netscape Communications Corp. got table into the HTML3 spec — it introduced them as something its browser supported, and developers jumped on it.

Andy Clarke (Malarkey) looked at it a different way in his blog post (Keep calm and carry on (with HTML5)). He argues, from his own experience, that W3C Working Groups are made of paid members who have an agenda to push their products and needs. He believes that those of us who are actually building web sites should ignore the chaos and just get on with using HTML5, CSS3, or other tools that get the job done. He reminds readers that the specs have changed over the years, as well as the support for those specs. No new HTML5 spec will change the way web developers go about doing their work.

Jeremy Keith (from Adactio) also blogs about this topic (HTML5 business as usual). He points out that the WHATWG is moving ahead on what they now call WHATWG HTML, which contains all of HTML5 as it was forked to the W3C, plus new and upcoming development. Keith then clearly splits the two up for readers to understand that the two specs are divergent — W3C HTML5 is on its way to becoming a candidate recommendation, and WHATWG HTML is the ongoing evolution of HTML beyond version 5. The rest of his post offers some insight into how and why there appears to be so much infighting and why the process is so confusing to those unfamiliar with it.

What Does This Mean for You?

Not a whole lot. In general, if you're a web developer who is just listening, trying HTML5 on projects, or actively evangelizing it, there's really no reason for you to change. The last real shake-up in this world came when XHTML2 was called off and all the XHTML evangelists felt like they were left holding the bag. That's unlikely in this case since there is no other equivalent spec for use in the web browser (not in the same way). All of those dust-ups we've seen are a function of a more public process as the specs are hammered out, something that wasn't much of an issue when the HTML4 spec was being drafted.

What we can expect to see is a new divide in whether people choose to support the W3C HTML5 spec, or the ongoing WHATWG HTML spec. Until browsers start supporting things in HTML5 (which is still not an official spec), then those battle lines may not be drawn for some time. At least not among web developers.