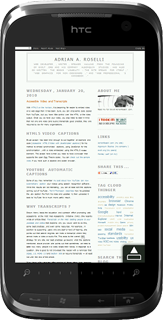 Back in 2008 Pew Internet predicted that by 2020 the mobile device would be the primary tool worldwide for connecting to the internet. I recommend reading some of the comments made by survey participants in the 2008 Pew Internet & American Life/Elon University Predictions Survey. I'm tempted to reproduce them all here, but that would be plagiarism and make for a far lengthier post.

In April 2009, Pew Internet (Pew Research Center's Internet & American Life Project) ran another survey and reported that 32% of Americans have used a mobile phone to access the internet for email, instant-messaging, or information hunting. On a typical day, 19% of Americans use the internet on a mobile device. This represents a 73% growth from their survey 16 months prior.

In December 2009 (last month), the number of mobile internet users hit 450 million, with a prediction that it would hit 1 billion by 2013 (as reported by IDC). Nielsen reported (as retold in this blog post) that mobile internet access by US users climbed most among teens and seniors back in July. While the mobile web in the US is still about 53% male, new female users have climbed up in the ranks nearly twice as fast as new male users.

The notion of a digital divide for African Americans has some resonance when thinking about the wireline internet, said John B. Horrigan, Associate Director of the Pew Internet Project and principal author of the report. But when you introduce the mobile internet, the picture changes and African Americans are the pace setters.

Often in the U.S. minorities fall into the lower socio-economic classes. In general this seems to coincide with my own experiences (client, community, and otherwise) that suggest that given the often cheaper hardware cost for internet-enabled mobile devices, this is a far more economic and portable way to get on the internet and stay connected. Online services that target specific communities need to keep in mind how their users access the web in general and must be prepared to support it.

For example, surfing on an old Blackberry via WAP would have been a much less engaging experience, but the advent of the iPhone and mobile Safari is an example of how mobile browsers are now capable of accessing the same content as a traditional desktop browser. Lack of Flash, PDF or video support has been largely cast aside as mobile devices can now play video and have embedded PDF viewers. The Flash roadblock is also sliding away depending on the device you use. No longer must a site developer create both a WAP and HTTP/HTML site, but can now create a traditional site with some additional hooks for mobile devices.

Some of us even prefer the mobile versions of sites to their traditional counterparts. For example, I typically use Facebook through my Windows Mobile device, moreso than via my desktop browser. In my case, I prefer the timeline and ease of access compared to the script-laden madness of the regular site.

Back in November the blog Communities Dominate Brands posted a diatribe on this very topic, Why Mobile Data Services (or 'Mobile Internet") is 'better' than old legacy PC based internet.